The day went well so far – I was happy to continue my streak of not losing a game in Germany. In 2017 we went to Berlin where I managed to take a 3-0-win as well. But I knew that the odds for our next match were against me: I haven’t ever won a match on a glass court against #teamorange so far. In case I would have forgotten the fact, Joel kept reminding me about his clean glass-court-record on our way back to the train station of Freilassing.

After a 9 minute train ride we arrived early at Europark Salzburg where the Austrian Bundesliga took place and we had the honor to watch Mohamed Abouelghar facing Austrian National Champion Aqeel Rehman. I was excited to later play on the same court as a PSA-top-10-player. We had an early lunch and then went back to the court where we prepared for our next battle – but only after we took some photos and chatted a bit with all the stars: later World Tour Finals Runner up Mohamed Abouelghar as well as Austrian Champion Aqeel Rehman and the winning Austrian Bundesliga team of NV SU Wr.Neudorf-Mödling. 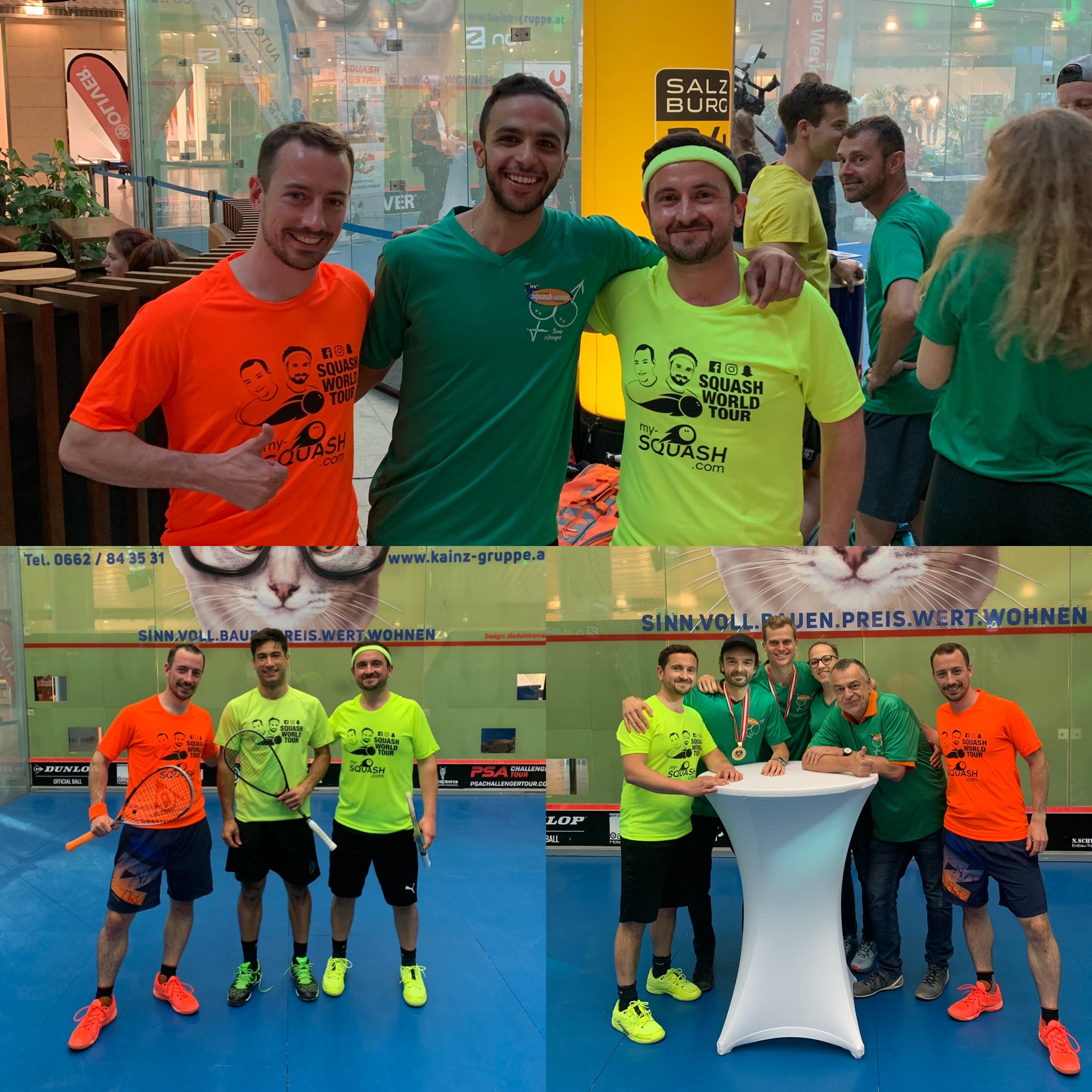 Our warm-up-session went well. We both had our difficulties with the diffuse lighting at the shopping mall but the excitement was massive. We both liked the court, especially the good grip and cushion on the plastic floor surprised us, to be honest. Game 1 was fun – although we both had to figure out how to play on the court. The quality of the match wasn’t high, but the intensity definitely was. Austrian number one Aqeel Rehman commented: “Please take some lessons! It hurts to watch you play!” #teamorange managed to take the game 11-7 and for me it was clear that he didn’t think about his lost match only hours earlier. 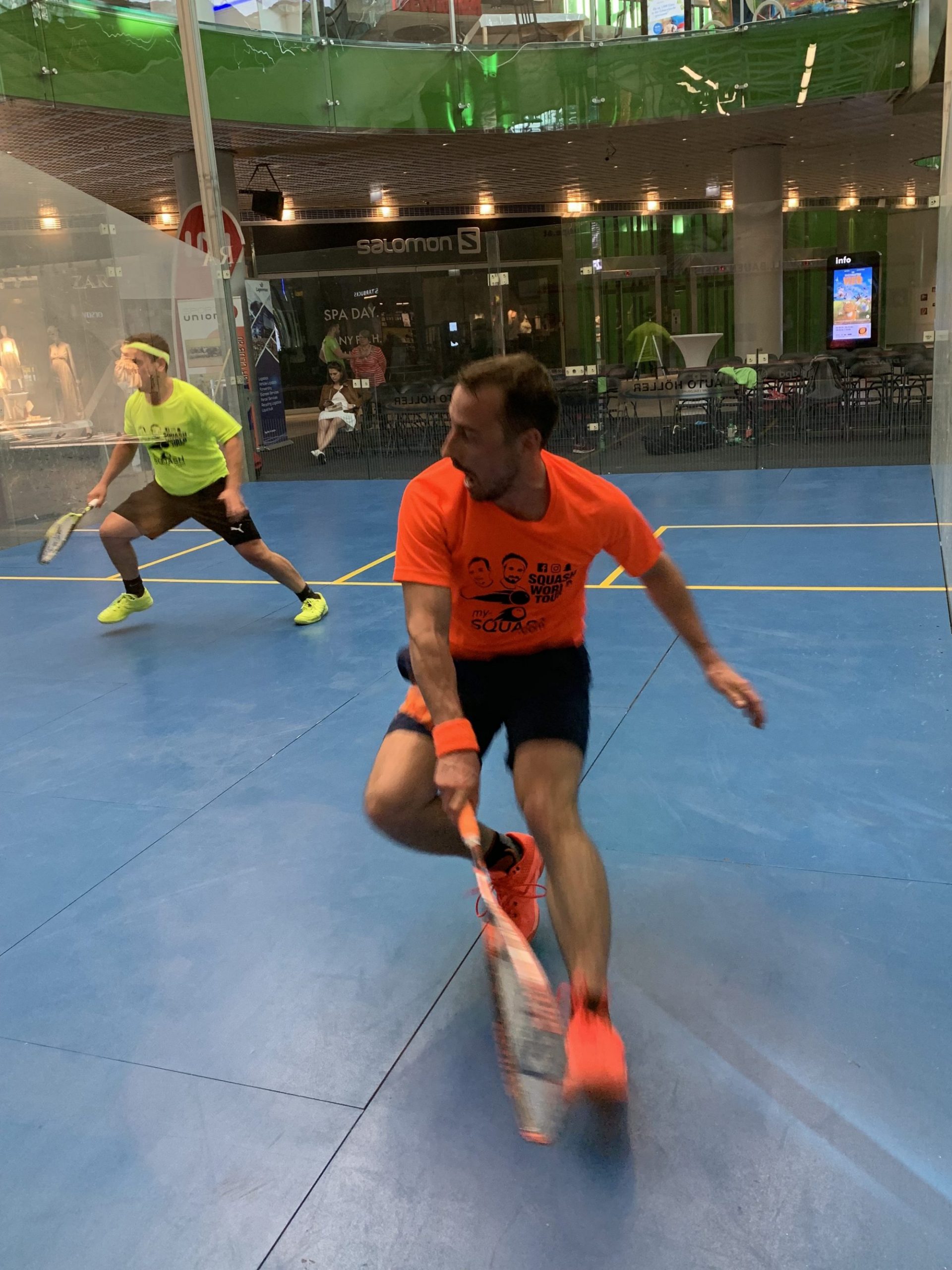 Without goggles into the decider

After game 1 I took off my squash goggles as it was getting harder and harder to see when the glasses fogged up because of the humidity. My game improved right away, leading to a 11-6 for #teamyellow and a positive attitude for the next game. In the third it was a close call: #teamorange was 10-8 up, I managed to earn a game point for #teamyellow at 10-11, but the orange warrior fighted his way to take game 3 with 13-11. Being back on court after a short break I took advantage of a short period of inattentiveness of Joel: I cruised to a 11-3 in the fourth, forcing a deciding fifth game.

The deciding game was a nail-biter

Our nerves were on the edge. The match was stil fair, but we both really wanted to win. We then argued about a let-or-stroke-call at 6-5 for #teamorange who wanted a stroke – but we finally agreed to replay the point as #teamyellow took all possible effort to clear the ball (the way I see it). Joel won the let point, but I stayed focussed and also benefitted from some missed shots of my buddy earning me two match points at 10-7. The first was saved with incredible effort by #teamorange – and almost was the second – but it just hit the tin and I could celebrate my first ever glass-court-victory!

Again we got a ride

Unfortunately our train from Europark to Salzburg was cancelled – we only found out when we arrived at the train station after we bought the tickets on our phones – thanks, ÖBB… Fortunately the waiter of Yaoyao (where we had the early lunch) invited us to share his cap to the center. Thank you one more time! It’s kind of getting a habit – in Břeclav we got a ride to the train station too… 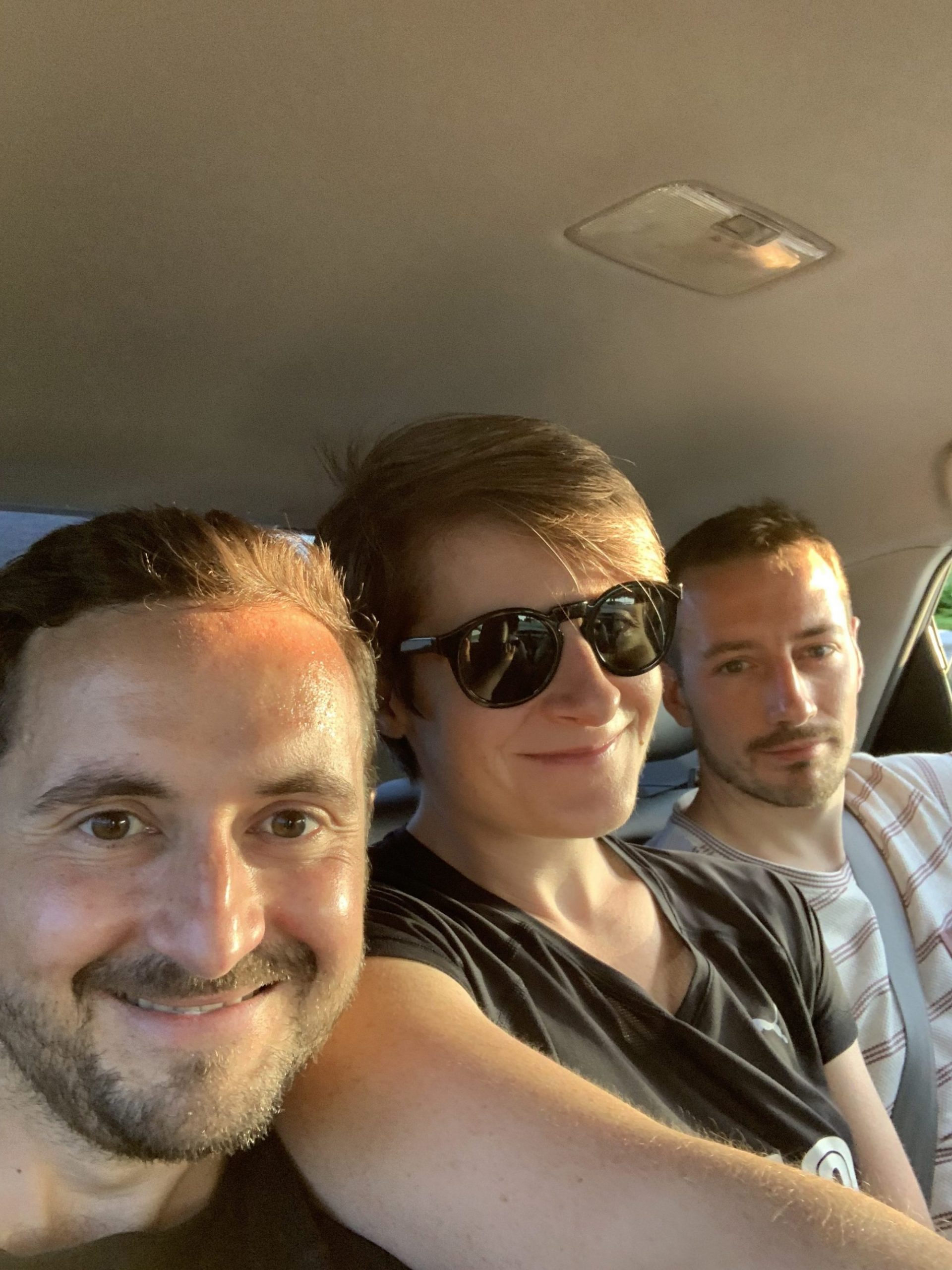 Great year so for #teamyellow

I now lead 2-0 in the annual Squash World Tour ranking, after winning the Vienna Edition another huge step for #teamyellow!

We don’t know yet where we will go next. Stay tuned for our upcoming adventures!  If you like what we are doing, we’d appreciate it if you would order our new tees to support us!